Four weeks into the latest Ebola outbreak in the Democratic Republic of Congo, 75 people have died ― making this eruption among the nine largest Ebola outbreaks since the deadly hemorrhagic fever was first identified in the 1970s. And global health experts are concerned this may be just the beginning of the fight in an already embattled region.

The northeast region of North Kivu has now identified 112 cases of Ebola since Aug. 1 ― nearly double the count of the previous outbreak in Congo that made headlines this spring.

North Kivu is home to about 1 million displaced people due to the ongoing threats from armed rebel groups in the area. The United Nations has its largest peacekeeping mission there and considers the region a U.N. Security threat level 4 (on a five-level scale). 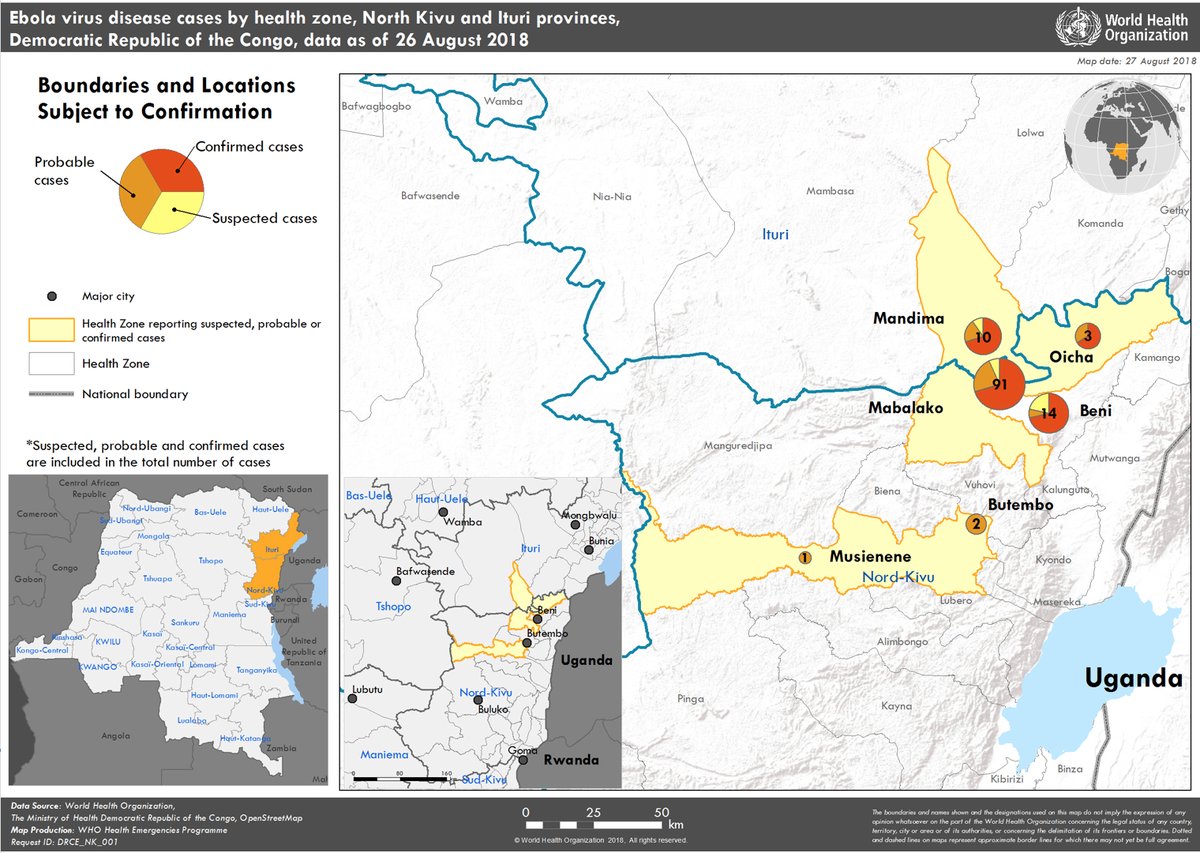 Global health experts are also worried about other factors contributing to the rapid spread of the disease, including a high infection rate among healthcare workers, porous international borders and other geographical difficulties, resistance from local communities to ceasing unsafe burial practices and an impending rainy season that could hamper logistical efforts.

Citing Salama’s comments, Dr. Thomas Inglesby, director of the Johns Hopkins Center for Health Security, told HuffPost, “We don’t know how this is going to go.”

While the current public health risk posed by the Ebola outbreak at the regional and national levels is high, according to the WHO, the global risk is low. The latter may be thanks to the international community’s swift intervention and investment, which could cost up to $43.8 million.

And yet experts say this battle is far from over.

“We are truly at the crossroads,” Salama said at a WHO briefing on Friday. “On one hand, the response is scaling up really well. … However, due to the trajectory of the initial set of cases and the likely amplification from healthcare facilities, we’re very likely to continue to see at least one additional wave of cases.”

Local Clinics Could Become Transmission Hotspots
Infection among health care workers is always a concern in major outbreaks because those people come into close contact with many others, easily passing along the infection. With 14 healthcare workers infected so far, local clinics in North Kivu are at risk of becoming transmission hotspots and expanding the outbreak, Salama said Friday.

[tweetshareinline tweet=”“Health care facilities and workers seem to be driving the epidemiology and its amplification,” Salama said.” username=”ta&makPOtyMZ$r&(rPutHU%2IQ1sNWH%:1:0″]

The infections among healthcare workers may be due to two factors, said Dr. Mesfin Tessema, senior director of health for the International Rescue Committee.

Since most of the region in northeast Congo where this outbreak is taking place had never seen Ebola before, many health workers were not equipped to recognize the symptoms and protect themselves and others, Tessema told HuffPost. In addition, the vast majority of health care clinics in the area do not have electricity or running water, which meant instruments and hands were being washed in a common bucket ― a recipe for further infection.

“The stories that we’re hearing about potential exposure in the health care settings and people having extended periods of illness in their home make us concerned that we will see another wave of infection,” said Dr. Inger Damon, the director of the Division of High-Consequence Pathogens and Pathology at the Centers for Disease Control and Prevention.

When It’s Dangerous Even To Track Cases

In order to track people who might be exposed to Ebola, health teams need to go deep into a community to find potential cases ― and then monitor them twice a day for three weeks over the possible incubation period. That can be difficult in places where an armed escort is needed for even the simplest travel.

Salama called the “red zones” ― the areas of highest security concern where health workers are now required to travel with armed military escorts ― blindspots for the Ebola response.

“I don’t believe … that we are likely to be missing a large cluster of cases [in the red zones] ― that’s highly unlikely,” he said at the WHO briefing. “But what I cannot rule out is that there are a small number of cases in those security blindspots that we are missing or perhaps will be delayed picking up for a few days because of security issues.”

Salama detailed how his worst fears were realized when a doctor in the town of Oicha, whose access road is controlled by the Allied Democratic Forces (ADF), was confirmed to have Ebola. The violent rebel group has a practice of taking hostages ― including priests, nonprofit workers, and government personnel ― which amplifies the security risk.

The threat that health care workers could be kidnapped for ransom or to treat insurgent members was one of the reasons that many community health care workers don’t identify themselves as such publicly, said Tessema, who was in the North Kivu city of Beni last month for a separate health project.

“Despite the fact that WHO and others have appealed to fighting forces for access for healthcare workers to resume their work, we haven’t heard from any groups that they have welcomed anyone,” Tessema said. WHO Director-General Tedros Adhanom Ghebreyesus called for free and secure access on Aug. 12.

Meanwhile, the start of the rainy season is throwing a wrench in some of the preparations for Doctors Without Borders’ second Ebola treatment center in the outbreak zones in North Kivu, experts said. It’s also making travel more challenging as the rain floods dirt roads

One thought on “DRC Ebola Outbreak: An active conflict zone and rising infections among health care workers are helping to spread the deadly disease”

It was a privilege to work with the Dr @Chikwe_I led @NCDCgov team on strategies to combat antimicrobial resistance.

The transformation and leadership at NCDC has been exemplary.
Wishing him all the best as he hands over, & starts the next phase of his journey
#VielenDankChikwe

We present to the world the next DG @NCDCgov Dr. Ifedayo Adetifa @IfedayoTiffy

Today is not the day to be screaming too much about how hard it is to achieve anything in Nigeria. Today, is the day we say #VielenDankChikwe for everything that you have done, over the last few years. It has been a transformational journey indeed!

Proud privilege to have worked with @Chikwe_I on the landmark #NCDCTransformationalJourney.

Sir, I join the @NCDCgov and my fellow countrymen to celebrate your excellent leadership. I wish you the best on your next important role at @WHO Hub in Berlin.

Not much to say today, but I have been privileged to work over the last half decade with amazing leaders in Nigeria’s health sector.

The journey to building a strong & resilient health system is indeed complex and challenging. Yet, today is a day of reflection on what has been an amazing journey, in protecting the health of Nigerians. This is the passing of the baton and the beginning of new journeys. Onwards!